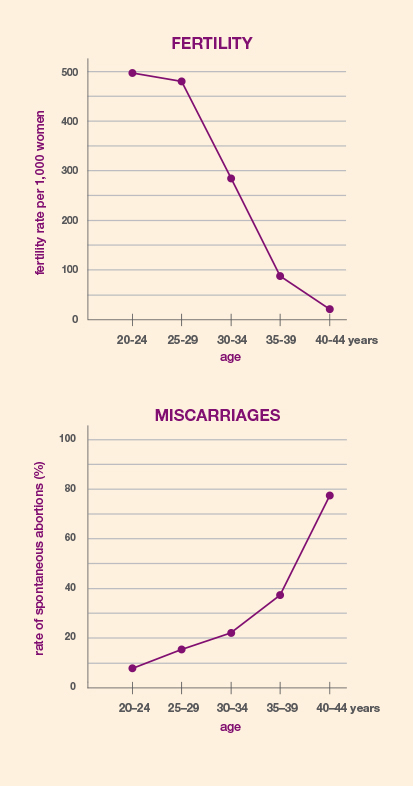 In Austria, as in many other countries also, there is a trend towards late motherhood and few children. Therefore, it is no longer unusual for there to have been 20 years of hormonal contraception prior to the first pregnancy. On average, therefore, a woman is left with fewer than 25% of the fertile years that nature has allowed for the reproductive phase. Nevertheless, the chances of conception decrease drastically with age. If the woman is aged 35 or older, the probability of successful conception is halved to barely 50% instead of the original 90%. In 2014, the average reproductive age when the first child was born was 29, with it becoming apparent that this age was continuously increasing.1) The statistics from the “IVF-Fonds” (IVF fund) of the Austrian Department of Health reveals that there were 9,101 in vitro fertilization attempts by 6,153 couples in the year 2015 alone. Compared with 2012, this corresponds to an increase of 26% in the number of attempts and 21% in the number of couples. With 1,680 attempts (40.4%) in 2015, PCOS is still the most frequent indication for IVF treatment when the cause is related to the woman (2012: 27.1%).2)

With increasing age, the following criteria that are essential for a couple’s fertility deteriorate:

Women of a normal weight have the best chance of pregnancy as long as they eat a long-term balanced diet. Severe underweight or overweight influences both the hormonal balance and the female cycle, since adipose (fatty) tissue acts as an important producer of hormones, among other functions.

If there is too much of this adipose tissue, there will be an excess of hormones and the hormonal balance is disturbed. The cycle is no longer regular, the function of the ovaries is affected negatively and the probability of PCOS is significantly higher.

An imbalance between the gender-specific hormone cycles may lead to metabolic disorders and manifest itself, for example, in deposits of fat cells. A typical symptom of PCOS is an elevated level of male hormones, which can result in overweight. Women who suffer from PCOS often exhibit impaired sugar metabolism, elevated blood lipids and high blood pressure. Those affected are also at an increased risk of metabolic and cardiovascular changes and even metabolic syndrome.3)

An ideal weight is not the only important factor, however. It is just as important what the woman eats and whether she receives the correct supply of specific micronutrients and antioxidants. Although the diet of the man has a decisive influence on fertility, this factor in women plays a much more important role, as they additionally need an adequate store of nutrients in order to be able to carry their baby for nine months. The mother’s dietary intake influences the healthy development of any future children even when the couple are trying to get pregnant.

Women with polycystic ovary syndrome in particular have an increased specific requirement for micronutrients, so specific dietary management plays an especially important role.

Stress and the wish to have a child are not compatible, as not only does the libido suffer, but stress also upsets the hormonal balance in men and women. If a person is permanently under stress, too much prolactin is released – a hormone that can have a negative effect on both the female cycle and the man’s sperm production.

A study from the USA shows that a high level of the stress indicator alpha-amylase is associated with an almost 30% lower chance of conception. 4)

Smoking affects the fertility of both women and men as well as the course of the pregnancy and the health of the unborn child.

It is also important in this regard that even nicotine abuse prior to conception has negative effects. For example, we now know that smoking has a severe negative effect on the maturation of the egg cell as well as the quality of egg cells, which means other consequences such as more miscarriages. A study of 14,893 women showed that it took around 1 year longer for women who smoked to get pregnant than it did non-smokers.

If the male partner smokes, conception is also delayed significantly compared with non-smoking partners.5) However, nicotine primarily affects the sperm quality of the man negatively.

Alcohol is linked with reduced fertility and an increased risk of spontaneous abortion. It is assumed that alcohol has an effect on the female hormonal balance and accordingly may negatively affect follicle development, ovulation and also the development of the embryo.6)

Even if the woman does not drink any alcohol but the man continues to do so, the time until conception may be significantly delayed.7)

Find out more about Why fertility problems?