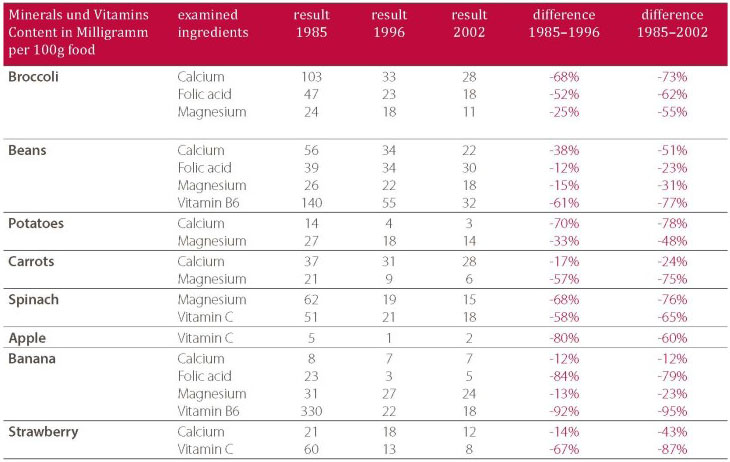 Studies show that today’s fruit and vegetables contain fewer vitamins. The main reason for this is deteriorated food quality due to intensive farming.
Many foods, which were formerly widely available and contained a high level of vitamins, are no longer available.

From approximately age 40 onwards, sperm quality starts to deteriorate; women younger than 30 years old have a 25% lower chance of conceiving if their partner is over 40, compared to a younger partner. At the same time there are more and more men in their 40s, who after pursuing their career, are now ready to settle down in a steady relationship and start a family. It is currently en vogue for older men to become fathers; men are thus also waiting longer to start a family. Although there is no actual change in men, it is well-known that the decline in sperm count and sperm motility is age-related. There is also a significant deterioration in sexual function with increasing age. There are also age-related chromosomal changes (genetic changes) in men.

Bisphenol A (BPA) is a plasticizer and with an annual production volume of almost 4.4 million short tons, one of the most widely produced chemicals. This chemical is found in many plastic consumer products as well as containers that store food and beverages. Traces of BPA can also be found in the internal coating of food tins. Alarmingly, BPA is also used in the production of baby pacifiers and baby bottles. Researchers from Michigan demonstrated a link between Bisphenol A concentrations in urine samples and altered levels of reproductive hormones.

Factory workers from China, who were exposed to BPA, showed sexual listlessness, as well as problems with erection and ejaculation. The U.S. researchers compared BPA concentrations in the urine of 218 Chinese workers with their sperm quality.

The results showed that higher BPA concentrations increased the risk for a poor sperm quality by two to four times. This also affected both sperm concentration as well as sperm vitality and motility, which are essential for fertilisation.

Certain pharmacons (such as anabolic steroids, medication with estrogenic, progestogenic or androgenic effect) can interfere with endocrine regulatory mechanisms and thus impact fertility. Some substances such as cytostatic agents, some antibiotics and immunosuppressants may have a direct gonadotoxic effect by inhibiting spermatogenesis. Tranquilizers and antidepressants, antihypertensive, antiepileptic and cardiovascular drugs can reduce libido and erectile function, some cases of reduced ability to ejaculate have also been reported.

The normal testicular temperature is approximately 95°F (35 °C). Heat (e.g. steel worker, heated seats, long periods of sitting for drivers, welding, and frequent sauna visits) can lead to an increase in scrotal temperature, and thus have a fertility-reducing effect. This can lead to asthenozoospermia, oligozoospermia or teratozoospermia.

Find out more about Reasons for subfertility